Petrol prices in India are touching the seventh heaven despite the low international price of per barrel. Alone in the four metro cities, the prices have gone up by at least INR 3 adding more worries in the list of the consumers.

Whatever, the politics behind this rising price strategy let it be. But, some anti-social elements of the nation are always looking for the ways to disrupt the peace of the nation by any means they can.

This time, with the rising prices of the crude oil in the nation a message on social media is going viral claiming that the citizens of Germany abandoned their cars in the middle of the roads against the rising prices of fuel in their country and this forced their government to roll back the raised prices. This time the message is going viral along with the actual picture of a traffic jam.

In Germany the government has increased fuel price. In just one hour of time people abandoned their cars on the streets and avenues and walked home. Over a million abandoned cars. They had to had to lower the price. When the people are smart the corrupt government can’t accomplish their goals. 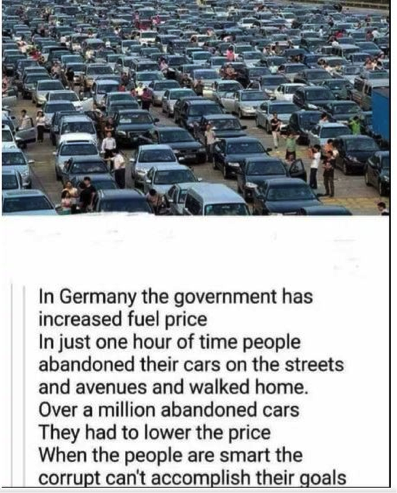 Well, you may feel like doing the same for the good of the common people like you and me after seeing the picture but don’t haste to anywhere before you knowing the truth.

The sad truth about the picture is that while the jam and people are real, this traffic jam is not even remotely related to the rising petrol prices in Germany. This picture is years old and was taken in China when thousands of Chinese spent their first day of the mid-autumn festival in a gridlock. This traffic jam was recorded as the worst traffic jam in the history.

For your further satisfaction, take a closer look at the faces of the people and when you will, you will see that it is not some European country but an Asian Country.

This traffic jam was almost 100 km long in length and is regarded as the mother of all traffic jams.

The traffic jam was reportedly caused by a new toll station checkpoint, which cut down the lanes on the highway from 50 to 20, as well as foggy weather.

Friends ! Please Check the Credibility of the Post before sharing such posts as there might be a possibility that such messages are created to incite public and create civil unrest in India in amidst of the Fuel Hike in Country.