In India hoax spreads like a fire in the forest and with the facility of modern day technology spreading the hoax has become as simple as clicking a send/post button on the social media. Not only a hoax spreads like an epidemic but people also believe in them like they are the eternal truth further spread the message among other communities and family members.

The recent hoax talks about the exemption of the toll charges if the vehicle has wait in line for more than 3 minutes. Many rejoiced on the news as Indian highways are busy and 3 minutes is not much of a time limit dreaming that they won’t have to pay the toll charges. However; their happiness was only short lived as National Highways Authority of India clarified the situation saying that no such rule exists.

Long waiting time on toll plazas due to congestion and long queues is not something layman of India is not aware of.

Hariom Jindal, an advocate from Ludhiana, filed an RTI with the NHAI, which says that if a waiting time in a queue exceeds the limit of 3 minutes then toll charges shall be exempted.

The original message says “ if the total waiting time including the time spent in the queue surpasses 30 seconds, which means delay and harassment suffered by the computers, what are the provisions for compensation to be paid by your office to the commuter?”

In one of its replies the NHAI talked about the existence of the 3-minute rule. Below is the screen-shot of the same reply: 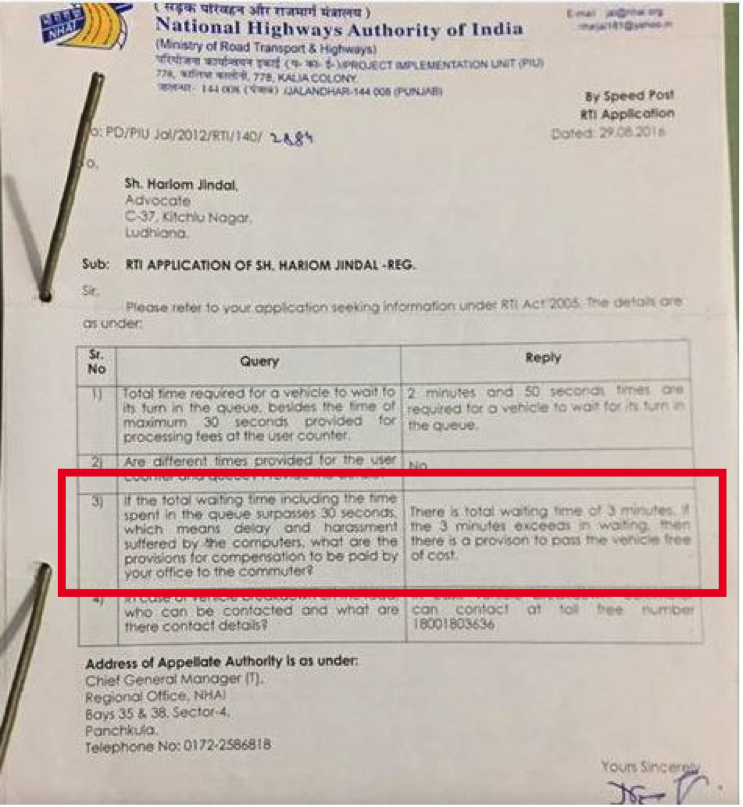 A report in TOI quoted Y Rajeev Reddy, former chief general manager of NHAI-Karnataka as saying, “As per NHAI rules, we should not collect toll from a vehicle which has been waiting in queue at a toll plaza for more than three minutes”.

During the independent investigations, it was found that there are provisions which talks about the maximum waiting time and a maximum number of vehicles parked in a queue but none talks about the concession as evident from the image below:

As evident, there is no such exemption of the fee rule and same was clarified by the NHAI in the following message “there is no specific exemption applicable relating to either time taken or distance of queuing of vehicles at Plaza, as part of the transaction. As such, it is clarified that there is no provision of exemption to User Fee in case time taken for crossing the plaza is more than 3 minutes”.

“Ministry of Road Transport and Highways in National Highways Fee (Determination of Rates and Collection) Amendment Rules 2010 dated 03.12.2010 has notified the list of vehicles exempted from payment of User Fee,” says NHAI adding that there is no specific exemption for the time taken.

The clarification is also available on the official website of the NHAI. 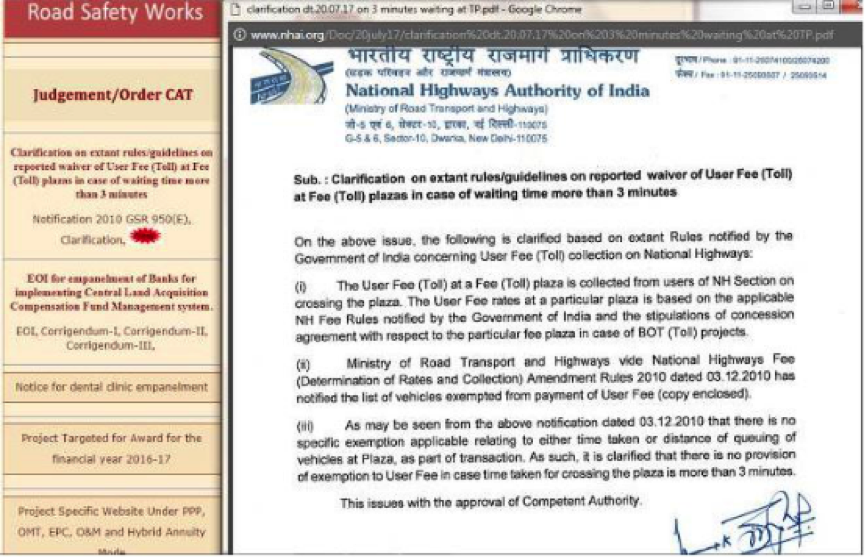 RTIs are supposed to provide the right information to the citizens but this bouncing back and forth on its own rules by the NHAI has left everyone in the dilemma.