Self Defense for Females: Simple Tactics Every Woman should know

Time today is bad and both men and women face an equal chance of getting attacked and assaulted. But, it so happens that women are seen as easy target than man and find themselves in such situation more.

Though self-defense techniques are gender neutral and both men and women need them , however women need them more as studies and statistics have shown that women are more subjected to violent incidents.

A self-defense technique does not only mean to paralyze or destroy the attacker but it also means that preventing such a situation from ever happening in first place. Learning to avoid or steer away from the attacker may not sound so interesting, but it is the first lesson of every martial arts/self-defense class. Just as ‘prevention is better than cure’ in medicine so ‘evading an attack’ is superior in martial arts philosophy.

And just to remember, your attacker could be female also but for the sake of this post, we will pose male as an antagonist.

So let’s get started on a mini self-defense course.

Being a martial artist doesn’t mean being big and strong like Superman but it means to have a thorough knowledge of weak spots in the human body. A Human body is full of weak spots and remembering them is the first step towards learning the self-defense techniques. Below is the picture of the simple vulnerable points in the human body. Memorize them like counting from 1 to 10. 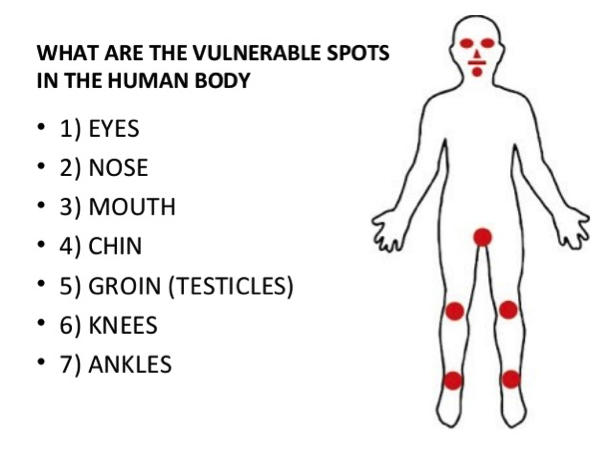 One of the best move out there for self-defense is to grab his little and ring finger with one hand and middle and index with the another and bend the wrist forward. This will make a big tall assaulter into a crybaby and bring him to his knees.

If it’s difficult to grab your opponent’s hand then hit him with a fist into his Adam’s apple. This will immediately disorient your attacker giving you enough time to escape and call for help. 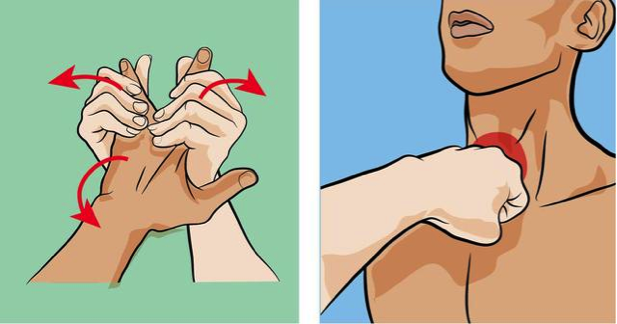 Hit in the groin

In men, the most vulnerable spot is the groin and all the classes, no matter in which part of the world you learn self-defense, will teach you to aim for the area. One powerful hit with a knee on the groin and your attacker will be paralyzed for some time. The pain that arises from hitting this area is very acute. 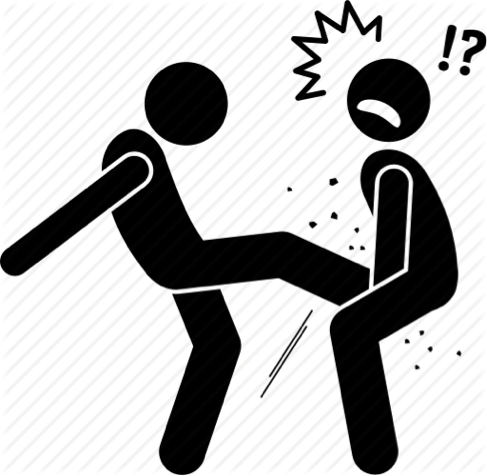 Grabbed from the front

If your attacker grabs you from the front and holds your arms so that you cannot attack then don’t worry. Move your hands a little bit forward and make a fist in front of your pelvis. This will create some room between you and the attacker. Once you have done this, use the opportunity to attack his nose with your forehead. This will push away your attacker and as a final step use your knee to hit in the groin. 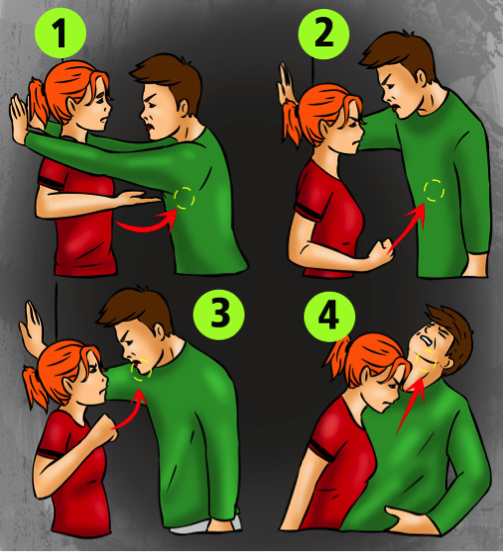 If he does not fall then go ahead and hit him in the chin and nose with your right arm to create some more room and hit him in the groin again. This will put him out of commission for a considerable amount of time and you will be able to escape and call for help.

If your attacker attacks by holding your hand then you can escape his stronghold simply if you remember this rule: Rotate your arm in the direction of attacker’s thumb and when your arm is under the attacker’s arm pull it back strongly. 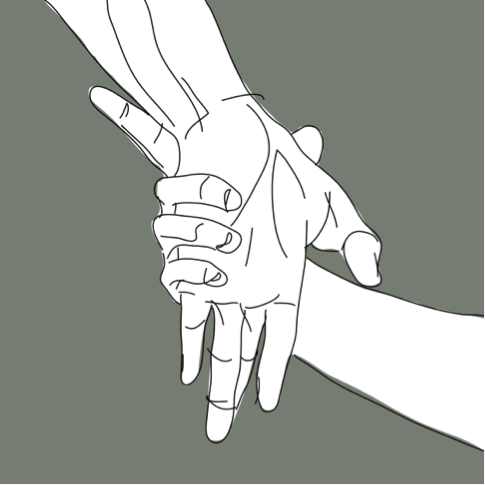 This is a simple move and you can practice it with your friends to get a good hold of it.

Grabbed from the back

Many attackers attack from the back because they get to startle their victim and can hold their hands along with the rest of the body.

In such situation, you can set yourself free by quickly bending back and trying to hit the attacker with your head. If you can do this is well and good and if you can’t then don’t worry as the hidden aim of this attack is to make the attacker bring one of his legs forward.

When he does so, quickly bend down to grab his leg and pull it upward with you to make him fall on the ground. 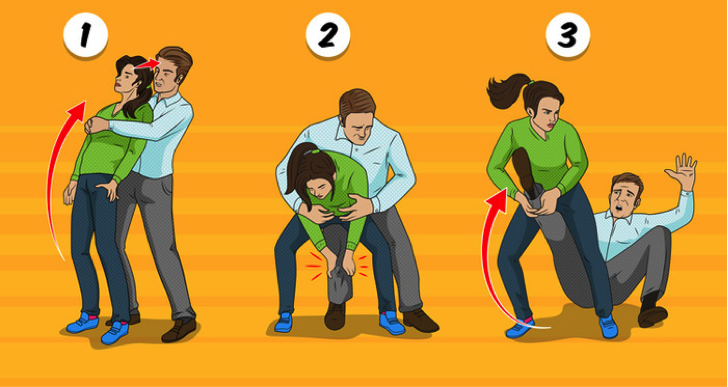 Grabbed from the side

If the attacker grabbed you from the side, you hit him with the elbow. Elbow hits are very powerful and martial arts told not use them unless absolutely necessary. With the elbow, you have the opportunity to hit the attacker’s temple, jaw or nose. The hurt will disorient him and as he falls back hit with elbow his belly or chest to further inflict the damage. This will give time to escape. 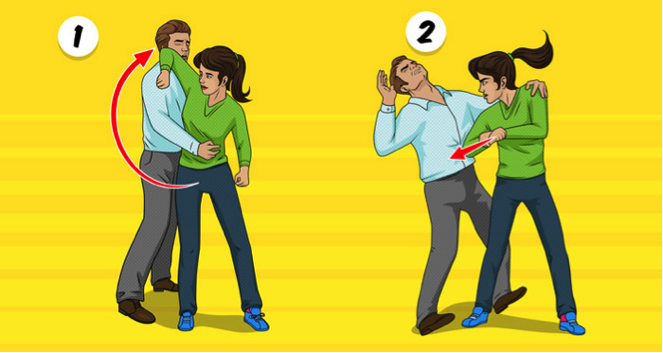 Remember girls, these attackers are nut jobs and bullies. They don’t have the real strength and prey only on the week to overcome their lack of strength. Though I wish that you never have to use these moves, but if the situation arises hit them hard and hit them where it hurts. Fight back !!

We, at Brainbuxa, hope that this article would help in learning basics of Self Defense. We pray that you don't find a situation to use these tactics - but if you have a bad day - Save Yourself with these basics. Be Brave and Fight Back !

Tags: Self Defense Protect Yourself Learn To Save Fight Back