That Sanskrit is respected by all as the language of sages and the mother of all Indian languages was never up for debate. However, despite its unmatched significance, the number of Sanskrit speakers in the country has been on a constant decline, or so it seems! But once in a few years, the language finds its flag bearer, someone whose love for the language makes him or her take up the cause of the language. Amba Kulkarni is one such flag bearer of Sanskrit. We struck a conversation with her to find out more about her love for Sanskrit and her efforts to propagate the language.

The first and the most obvious question was how did she fall in love with the language?

"I always loved Sanskrit in my childhood. I could score cent percent marks in it like Mathematics.It is the Paninian grammar which still keeps me engaged with Sanskrit. The way Panini organised the grammar in the form of concise sutras like mathematical formula, his use of metalanguage to structure the sutras, use of various techniques to organise the sutras linearly, the control mechanism, and several such small, but elegant ways of information management, representation, coding, etc. always attracted me towards the grammar as a mathematician and as a computer scientist."

At the same time Panini's minute observations regarding how a language works, how the language encodes the information, etc. made me realise the greatness of Panini. Every time I look at it, it gives me a new insight into the functioning of a language as a means of communication,"

she tells us, without taking a minute to think about the answer! With a higher education degree in Mathematics, Sanskrit wasn't exactly her academic area in the beginning."While I was exposed to Sanskrit during my school days, during 1980s, I came across articles related to Panini's grammar and Indian tradition of knowledge representation in the field of language processing," When still weren't convinced if that was the turning out in her love story with Sanskrit. When we asked more, she revealed, 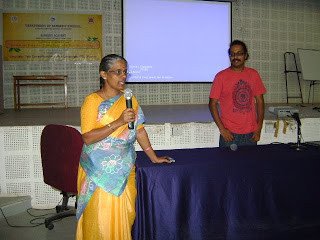 The one point which all those opposed to revival of Sanskrit reiterate in debates is that it won't ever be an everyday language anyway. Why to bother then? Here's what she has to say about this,

"Sanskrit language is already part and parcel of our day-to-day communication. Pick up any Indian language, you will find hundreds of words from Sanskrit in it. It is this common vocabulary which binds all of us together both synchronically as well as diachronically. Our cultural roots, history, heritage all is rooted into the Sanskrit language. And it is our mother tongue which binds us to our culture through the common vocabulary, either borrowed or adapted from the words in Sanskrit. The coming back of Sanskrit language would strengthen these bonds further."

Panini's Ashtadhyayi describing the rules of Sanskrit Grammar is considered by many as the holy book of Sanskrit that is regarded in high esteem by the language lovers and Amba is no different. She, in fact, has taken a special interest in studying Ashtadhyayi from a computational perspective. She lets us in on some of the findings,

"The modern age of information technology has provided a new boost to the studies of Ashtadhyayi from the perspective of information coding. The importance of Ashtadhyayi is three fold. The first one, as is well known, as an almost exhaustive grammar for any natural language with meticulous details yet small enough to memorize. Though Ashtadhyayi is written to describe the then prevalent Sanskrit language, it provides a grammatical framework which is general enough to analyse other languages as well. This makes the study of Ashtadhyayi from the point of view of concepts it uses for language analysis important. The third aspect of ashtadhyayi is its organization. The set of less than 4000 sutras is similar to any computer program with one major difference the program being written for a human being and not for a machine thereby allowing some non-formal or semi-formal sutras which require a human being to interpret and implement them. Nevertheless, we believe that the study of Ashtadhyayi from programming point of view may lead to a new programming paradigm because of its rich structure."

"The Indian grammatical tradition provides the scientific base for the language communication which is what the Information Technology mainly deals with. Where does a language code the information, how much information does it code and the manner in which this information is coded in a language are important for Language Processing. And Panini's Ashtadhyayi provides insights for this analysis."

Winner of the Vishishta Sanskrit Sevavrati Sammaan in 2015, Ms. Kulkarni teaches at the Hyderabad University. When quipped about the student response to Sanskrit at the University, she told us,

"We have only PhD programme in the department of Sanskrit studies, and we get very good students each year. All the students who have completed their PhD are well placed and are pursuing their research further.We offer specializations;in the area of Computational Linguistics and Ayurveda. The department also offers courses for the students of Integrated Masters, in addition to the PhD program."

She also has a word of caution for anyone trying to take up Sanskrit research in the country."Anybody who would like to take up Sanskrit as a subject at the higher education level, should also look at the scientific texts pertaining to various disciplines such as Mathematics, Ayurveda, etc. to understand the contribution of India in these branches of knowledge. This exposure would be useful to know what exactly is India's contribution. "she advises.

Before taking leave, we asked if she had a chance to look at the Brainbuxa education and to our joy, she responded positively. " This is a good portal for the students. You may also provide links to various important websites which are relevant for students under different categories,"and she signed off!

Do you want your interview to be published here so that it inspires thousands of readers? Write to us now!