He is 12 and can be easily mistaken for a kid obsessed with Pokemon Go; except that he can probably make that kind of application himself and get it published at the Apple store! Meet Tanmay Bakshi, a 12 year old entrepreneur and software developer. And we do not mean a beginner software developer who can just write a few lines of code and ask you to appreciate it. At 12 years, Tanmay is the world's youngest Programmer on IBM's artificial intelligence platform, Watson! Though only 12, he still holds an experience of a number of years in application development.

"I started programming when I was very young, so it is persistent; at 5 years old, I didn't know about the concept of a job, and I thought people coded for fun, I never knew they were paid for it!",

is how he describes his first venture with programming. But while many people begin early, only a handful, if any, peak at such an early stage.

"It was a dream for me too; at the age of 9, I had my first iOS app, tTables accepted into the Apple app store," exclaims Tanmay.

What perhaps has added to the aura of this genius is that he has always been keen on sharing his knowledge through free of cost channels. He tells us, 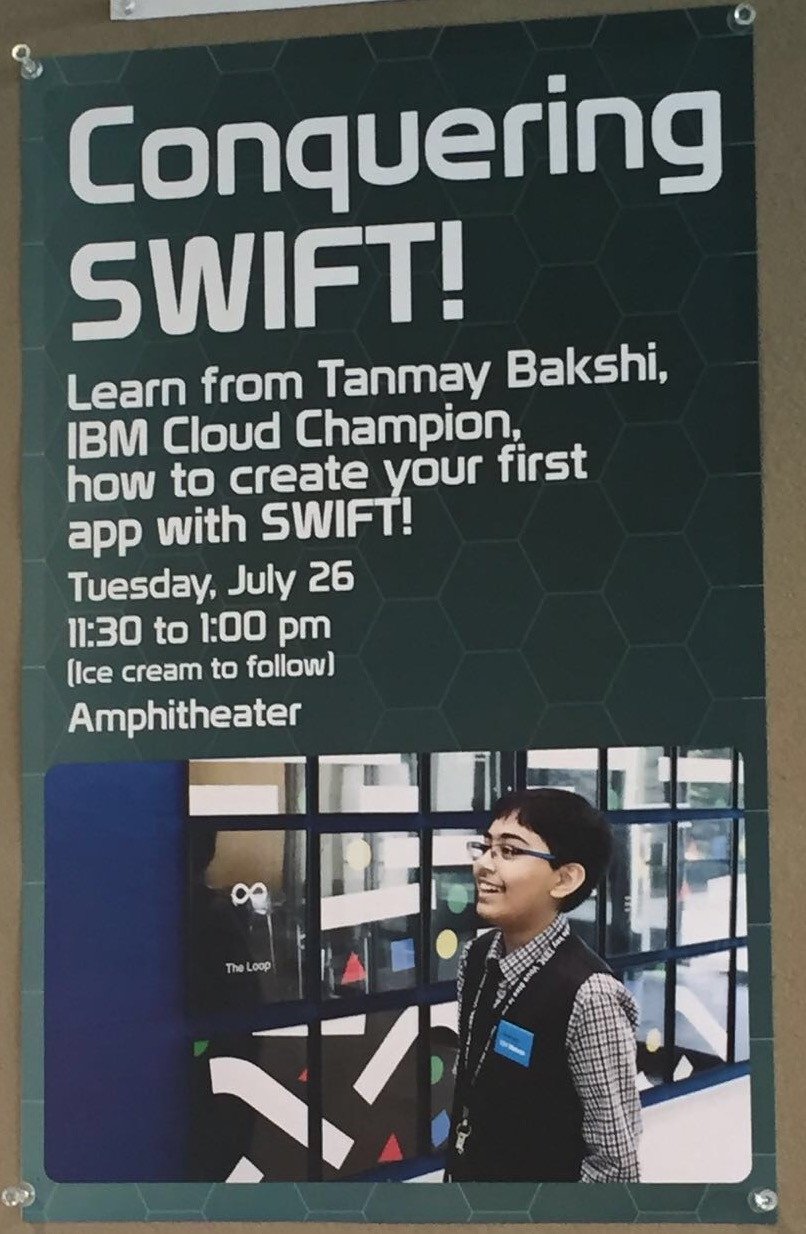 "For the past 5 years, I've been very keen on sharing my knowledge with others. I have my own YouTube channel where I share knowledge through my videos about Watson, Programming, Math, Science, Algorithms and so much more."

He may have been God gifted, but he has had his own share of failures, which have made him better, stronger and more determined. The enviable poise he displays in the face of such failures is nothing like a 12 year old's reaction.

"This journey was not smooth, there were many challenges that had to be overcome, especially since it was my first time trying to submit an app to the App Store. There were times when my app got rejected because, for example, the screen size was off, or the text was not large enough according to the specific app store requirements for apps.The end result that I get to see really drives me to conquer these obstacles, and overcome these challenges," says Tanmay.

Unlike many other small age wonders who like to stay away from the limelight and work on their thing, Tanmay has turned into a prolific orator, a skill he says he got better at while

"making youtube videos".since then, he has been addressing sold out crowds at some of the hottest tech conventions across the globe with a thunderous applause. Some of his addresses included

Ask about his new exciting projects and he would tell you,

"'Ask Tanmay' is actually the world's first Web-Based NLQA system to be powered by IBM Watson. It was a fantastic experience being able to develop it, and put thought and hard work into it."

There's much more to this youngest Watson developer in the world. A relatively unknown aspect about him is that he has also turned into an author!

"I have written a book called "Hello Swift! - iOS App Programming for Kids and Other Beginners". It's currently up for pre-order, and here is a link to it: https://www.manning.com/books/hello-swift," he tells us.

he tells us. Just when you think he is venturing into too many different fields at the same time, he explains his theory.

"Everything I do, whether it be Software Development, Keynote Speaking, Authoring,YouTuber, IBM Honorary Cloud Advisor, IBM Champion for Cloud, they seem very diverse; but they're not! When it comes down to it, everything I do stems from my passion for programming and sharing my knowledge. Also, here, I'm going to share a very special goal of mine: 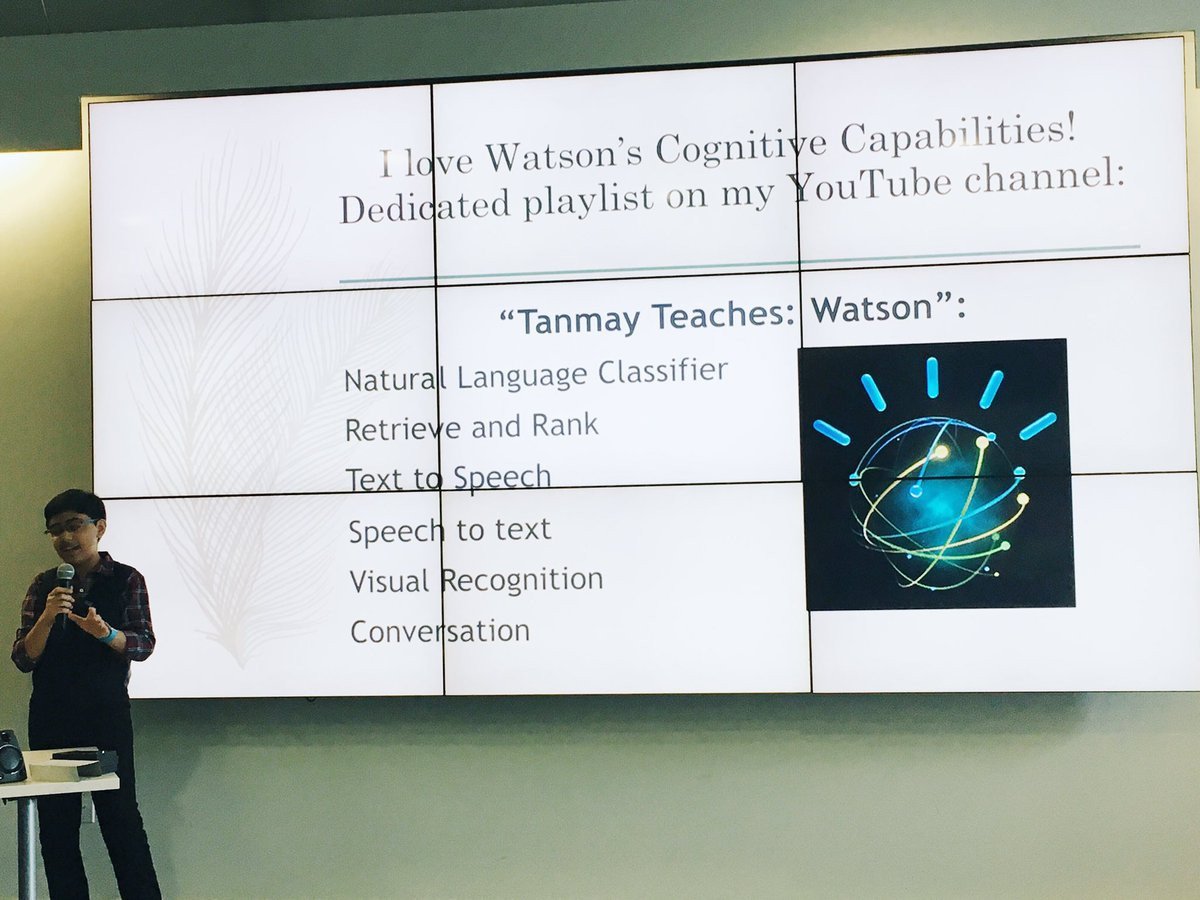 Tanmay clarifies.As someone who has achieved so much in such a short span of time, Tanmay isn't ashamed to admit that there were times when he got stuck in problems and wanted to give it up. However, experience has made him wiser, patient and smarter.

"The first few actually used to make me nervous, and I would want to, at times, give up. Gradually, I learnt from every such instance. From my experience, I have gained a precious trait, perseverance; because I believe that there's a solution to every problem.I learnt to learn from my mistakes, and never give up," is how he puts it.

In his journey of appreciation and awe, Tanmay doesn't forget to mention the key role played by others around him in making him a child prodigy. He says,

"This summer, IBM Canada designed a special training program for me, where I learnt technologies like NodeJS, AngularJS, Bootstrap, CSS, IoT, Open Whisk, and IBM Design Thinking, just to name a few. IBM noticed and appreciated the way I shared my knowledge and contributed to the community. It was a token of appreciation, and motivation, that they gave me the opportunity to be a part of their family, and make me skillful so that I can now put together, from what I've learned during my summer training, and let the community benefit from my knowledge."

Not the one to shy away from appreciating other great ventures, Tanmay calls Brainbuxa "a source of inspiration".

"I feel that Brainbuxa has taken up a great initiative! Bringing out a positive change in India's education system, and making more people aware of this fact is the best part. I think that if everyone took up something small, and worked towards a positive goal, it would be a LOT easier, and it would be faster & more efficient to implement it," he says, before signing off!