Team Emotix is bringing artificial Intelligence to India through MIKO

With the introduction of MIKO, India’s first companion robot with the capability of engaging, educating, and entertaining a child, Emotix is carving a niche for itself in the Indian tech market. We got into a conversation with them to know more about their company and its plans to disrupt the Indian robotic market.

For the ease of our readers, we requested the founders to start by explaining what is MIKO and its applications. In their own words, this is how they define MIKO and its utility, “This is the first product of its kind in India which many have hailed as a breakthrough development. From an academic point of view, this product helps in improvement of academic skills like Maths, GK and English. For a user which is the child, it is very important that the gadget is interacting with gives him new content regularly in form of new conversation or games. Miko does this through access to a wide pool of inbuilt knowledge base and access to more via the internet. It talks and responds to children and adapts to cater to their specific needs” 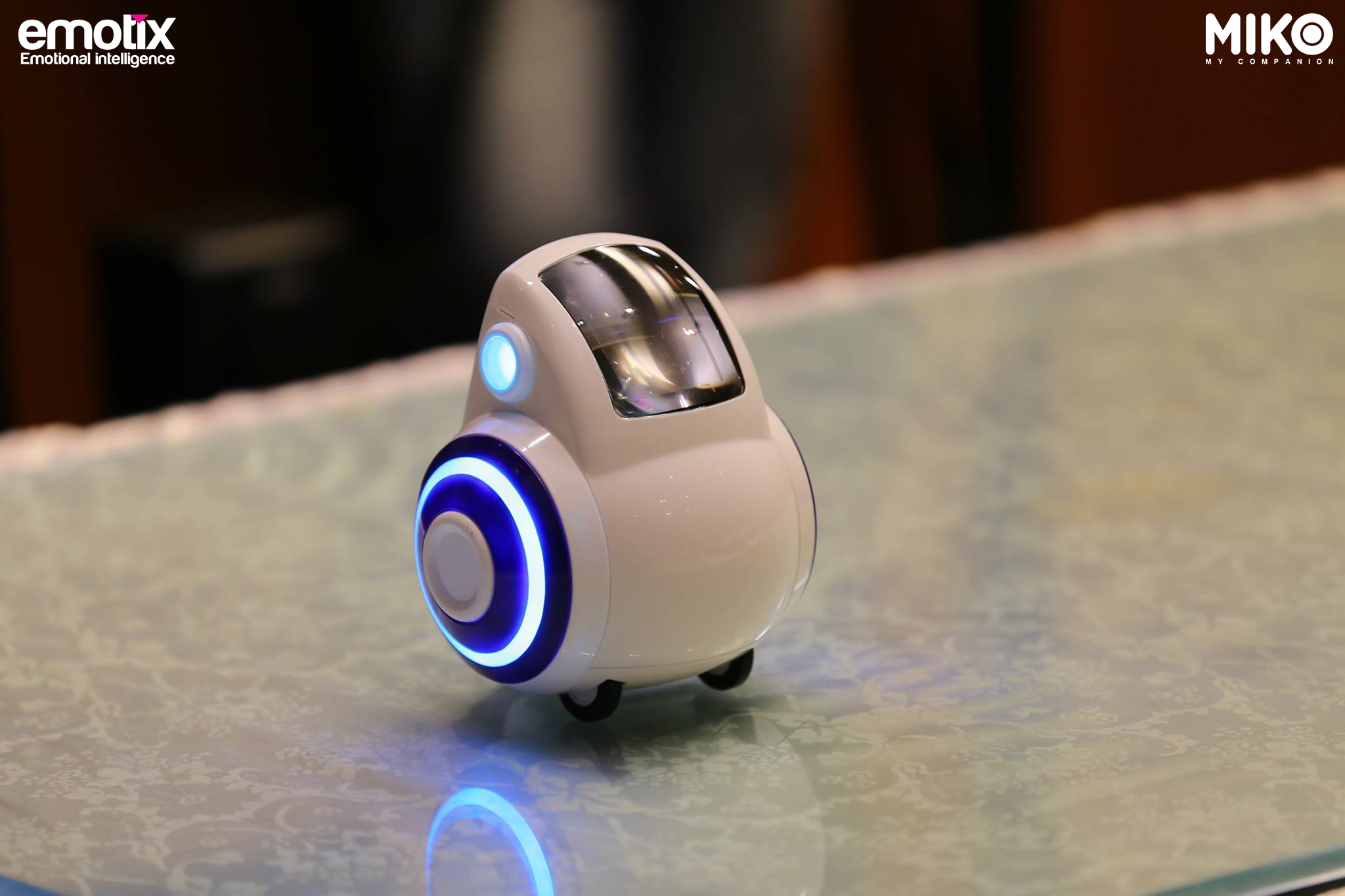 Unsurprisingly, the founders of Emotix hail from IIT-Bombay, India’s top most technical institute. The 3 co-founders of Emotix identified the emotional needs of Indian consumers after leaving their cushy corporate jobs and went on to set up Emotix. The journey was far from being easy.

They explain, “Over two years and with a global team of over 20 engineers, mathematicians, artists and neuropsychologists across India, Russia and Korea, we successfully developed a Companion Robot for use of children from the age-group of 5 years and above. We named it MIKO that goes along with its tagline “My Companion” for a child who is the (consumer) and purpose of building companionship with a child.”

What makes MIKO revolutionary is its ability to understand and respond to the child and his needs. The co-founders revealed, “Since Miko is conversational and can understand, adapt to and respond to your child’s needs, Miko can convey this knowledge to your child in the best way possible. MIKO allows the parents to control the relationship it shares with the child. Another interesting yet very important feature of Miko is that it learns more and more about the interacting child’s likes, dislikes and preferences as they interact 2 on various topics. It is just like a relationship between two friends where each learns about the other as days pass by. With a parental dashboard, the parents can customize and access its activities any time. Then can understand the progress made by their child over weeks of interaction with the product.”

What is working really well for MIKO is its extremely competitive price point of INR 19000 which has been arrived at after much consultation. “Our customers (parents) see this product that does emotional as well as social development of child. Also it brings about improvement in academic skills like Maths, English and GK. Today an average upper middle class parent is ready to invest INR 20000 to 50000 on summer camps and various courses that occur. Hence, we fixed a competitive price point of INR 19000 for this product. There is no direct comparable solution for the same in India.” they told us.

Although some international partnerships are coming up with similar products for other markets, there is still no direct competitor for Emotix in the Indian ecosystem which has been their USP. We were told, “Many companies have developed a number of humanoids, such as Nadine, by the scientists at Nanyang Technological University, Singapore and Sophia, by Hanson Robotics. SoftBank’s Pepper and Nao are other example of social robots or companion robots. For instance, Pepper is capable of identifying the principal human emotions which includes joy, sadness, anger or surprise.

“What differentiates us from these is that we as emotix develop social companion robot targeted specially towards children. The development of this idea took shape over two years with a team spanning 30 engineers, mathematicians, artists and neuropsychologists across India, Russia and Korea. The exact experience that needs to be given to a child has come along with many pilot iterations and beta tests. Thus, we have given lot of attention to detail with respect to hardware, the visual design, optimized software, AI and also the experience this product brings to the user.”

Their demand is matched by the upcoming numbers too. Within a couple of months of their launch, their entire first production launch was booked and the demand is only increasing. “Upper Middle and Middle Class India are the fastest growing segment of the country (30% CAGR) is our main target for such product. The outreach to the consumer has been both digital (via social media) and offline (participating in events/shows and general/modern retail),” they revealed.

While there is little data to establish that the Indian public is embracing artificial intelligence, it is certainly in high demand globally. We were told, “The consumer robotics market is too young to have reliable data for it. We live in a world where companion robots are not as commonplace as smartphones are today. We are only beginning to understand the consumer needs that robots can satisfy. Once they are competitively priced, as Miko is, the consumer robotics industry can be expected to explode like the smartphone industry did.”

Emotix was ranked 2nd nationwide at IBM Smart camp for Deep Tech startups in December amongst 135 applicants. Attached is one of the images for the same. 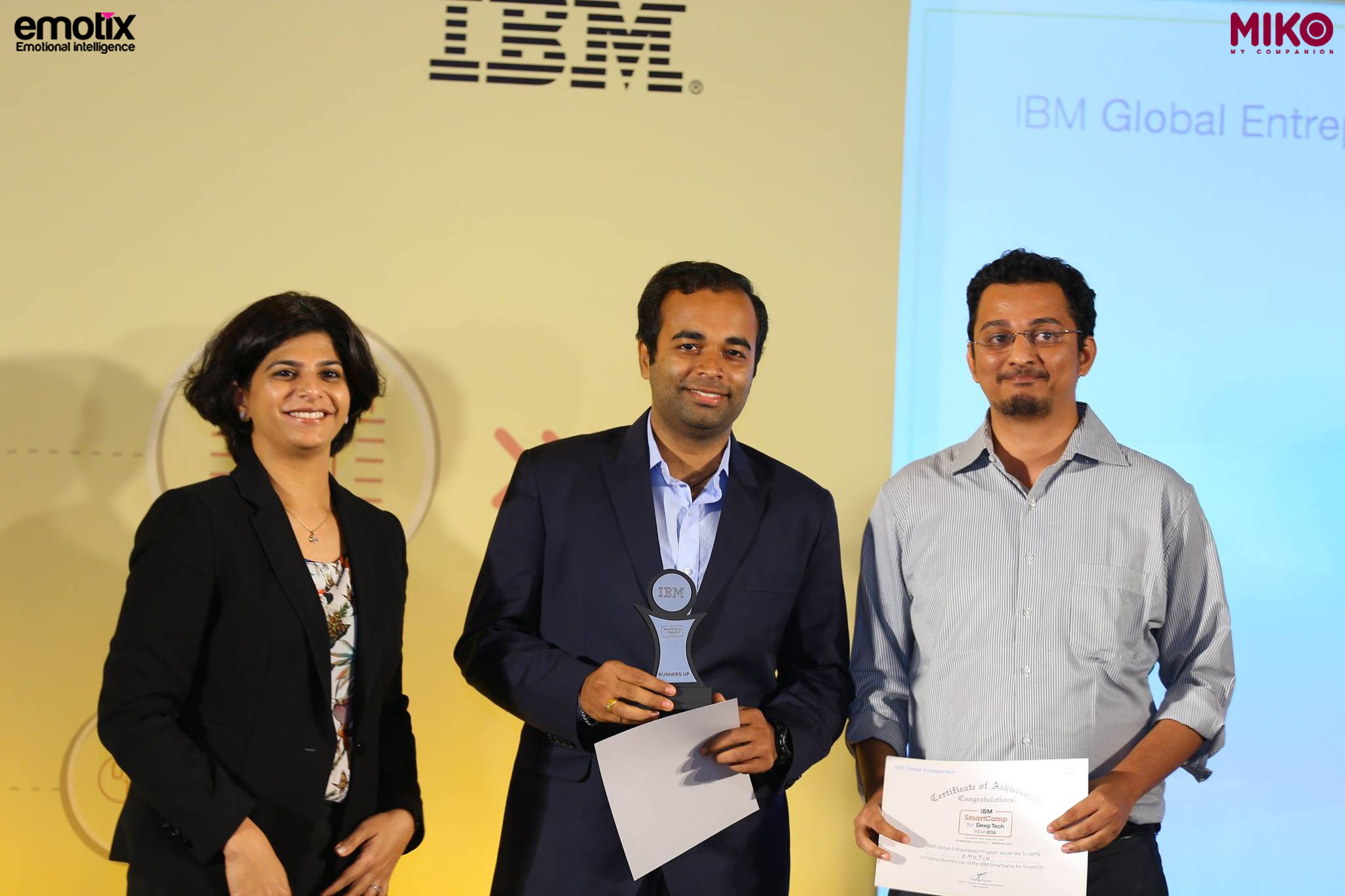 The company has plans to make sure that MIKO is never outdated by providing it continuous over the air updates and adding new features. “The AI and the experience of the product is constantly refined and updated to add more value to our users. The next big update which we are eagerly working for is the programming game to be released shortly. MIKO will be first of its kind product in India that teaches programming to children with focus on basic of code development and designing algorithms. It will be an easy and lucid way of learning programming with MIKO as children are given challenges through a vivid gamified experience,” they said.

Despite their huge launch, team Emotix is not willing to sit on its laurels and is aiming for higher grounds. They share their plans,

“Emotix is planning to bring a host of emotionally intelligent products and services for every Indian household in the coming 5 years. Our initial target markets are undoubtedly the large urban cities in India with nuclear families. Our future offerings shall be must-have solutions for all strata and age–groups of the society with our target consumers being in urban and developing cities in India.”

In between all the talks about Emotix and MIKO, we managed to get their opinion about Brainbuxa too. This is what they said, “Brainbuxa appropriately lives up to its tagline “full of infotainment”. It is a great platform for upcoming entrepreneurs, students and institutes to share information and ideas. I see a great future for the company as it starts rolling out more features.”

Let us know your thoughts about this interview in the comment section below. Also, if you think your story is just an inspiring and deserves to be on this page, let us know!